Maya and I became a family on February 14, 2007 in Astana, Kazakhstan. This blog is my adoption story beginning when I got the call in January 2007 through today. Meet my little love.....

Our New Family - First Day Together

It's been an ENTIRE YEAR since I've updated 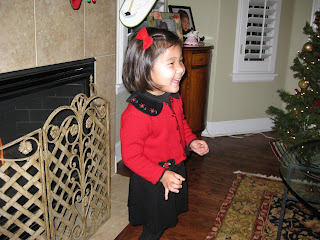 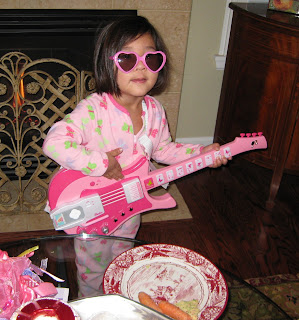 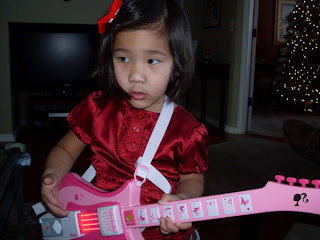 These pictures are from Christmas Eve and Christmas Day. As you can see the guitar was a huge hit.

I knew it had been awhile since I've written but a year? Little Miss has changed quite a bit. She is still an Amazon and growing. A quick update.....We celebrated the 2nd anniversary of our court date on Valentine's Day. It was such a nice day. We started out by bringing Valentine gifts to the kids at Children's Hospital. Then to storytime and tea party at Barnes & Noble with her Godsister Landon and Godmother Kelly, then off to a girls lunch. My 2nd annual attempt at an authentic Russian meal didn't happen. This time I got ill BEFORE eating or even preparing the meal. I've actually become a better cook over the last 2 years. Not sure what my problem is with making Russian food.
Maya did get baptized, much to Grandma's delight. Maya finished out the school year at JCC and started at Montessori last Fall. She is doing great there. Uncle Mike and future Aunt Laura came out to visit a few months ago. This was the first time we all met Laura. She is wonderful and they are getting married this July in Sonoma. Well, my party girl has talked about "Uncle Mike's party" NON-STOP! Everything is about the party. "Look Mom, airplane! We go to Uncle Mike's party". "Maya what are doing?" "I get ready for Uncle Mike's party". She is a woman obssessed. More to come.....
Posted by Kimberly Collins at Tuesday, February 24, 2009 2 comments:

A Catholic and a Jew all in the same week 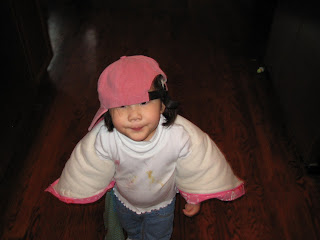 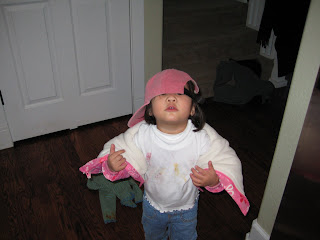 Ok first off if anyone reading this is devoutly religious without a sense of humor, skip this one.

I was raised Catholic in a pre-dominately Jewish neighborhood. I was actually really into being Catholic - going to Catholic retreats and singing in the folk group. It was very important to me to go to a Catholic college, which I did. And there I lost interest. Freshman year was the end of my Catholic days.

So here we are 20+ years later and I haven't given religion a thought. My Mother has been horrified that Maya hasn't been baptized and my response has been I'm not going to participate in something if I don't believe in it. But then again.......my very dear friend Kathy, also Irish, also raised Catholic, and also non-practicing has a good point. She had her daughters baptized. Why? Because......what if we're wrong. Hummmmmm.....food for thought. Wouldn't want her burning in hell because Mama was stubborn.

All of this is a preface to how I became a practicing Catholic and a Jew all in the same week.

It all began with wanting to pull Maya out of Primrose for reasons not worth getting into. Just the right thing for her. Who knew just how difficult it is to get a 19 month old into a pre-school!!! I had no idea. Everywhere I called had waiting lists and lotteries. Of course I sought all of my friend's advice about where they sent their kids, who has the best reputation, etc...

I started calling, filling out applications, touring, and getting overwhelmed by it all. I'd heard great things about a Catholic school that doesn't start until age 3 and goes thru 6th grade. Maya wouldn't be eligible until Fall of 2009. BUT I was told, "get on the waiting list now!" I did. And by the way, there is a much better chance if you are a member of the parish. Well........do you hear that? That sound would be the angels singing, Ahhhhhhhhh in response to my Mother's prayers. As she says "The Secret" works.

What the hell. I joined the parish. We have to go to church 2x/month minimum to be active members. And yes, Maya will be baptized. I mean I'm already there.

We also applied to Montessori which I am excited about and hope she gets in for Fall of this year. This school goes through 6th grade as well. I loved everything about it. We find out in March. Again - lottery. Oh and there is an interview for this one. I go on Friday. One of the schools I called initially, the JCC (Jewish Community Center) has a great reputation in the area. Everyone raves about it. When I called them I was told not much of a chance of us getting in since we weren't members. I was told by friends that it is quite diverse - about 50% Jewish and 50% everything else. That appealed to me - the diversity. Personally, I think diversity is important. In fact my main objection to the Catholic school is the lack of diversity - a sea of blonde hair and blue eyes.

The JCC called the same week I joined the Catholic parish to say they opened a new Toddler class and have a spot for Maya starting the next week. I was delighted. Ran down there, toured, and signed a bunch of papers. One of which made me a high member. No clue if I spelled that correctly and no idea what it means. I think I'm a Jew now too. Basically I've gone from agnostic to card carrying member of two religions in a week all for the benefit of a 19 month old's education.

It sounds crazy right? I know. I never thought I'd be obsessed with all of this at her age. After all of this I just want her somewhere that I think is good for her and I don't have to go through this again until college.

It actually doesn't feel bad to be back at Church. Amazing how all of those rituals come back as if it were yesterday. I really like our Priest and Maya LOVES the singing. When they stop she says more...more...and claps. Maybe it will be a good thing for us. Do you hear that???? Yeah, the angels again.

And I do like the JCC. I like the community there, the core values of their belief system, and the embracing of all cultures.

In the end however, it seems her future is as a rapper. I turned around yesterday and she had pulled her coat off of the railing and my hat. This is her feminine ensemble. I'm so proud.
Posted by Kimberly Collins at Wednesday, February 06, 2008 5 comments: 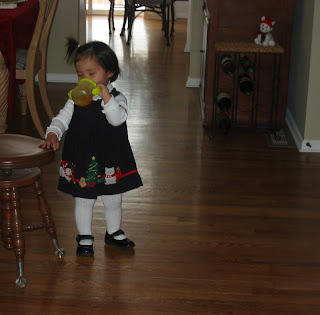 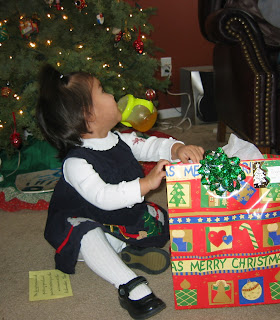 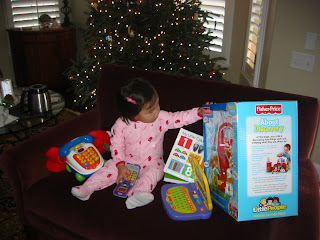 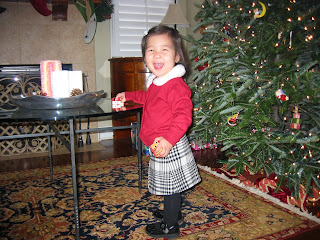 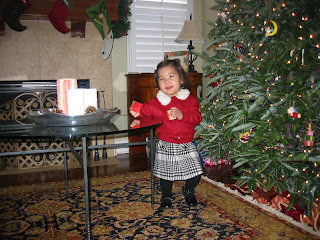 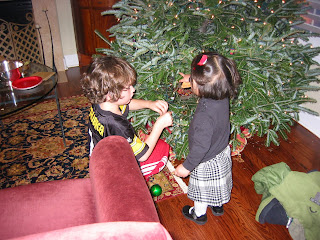 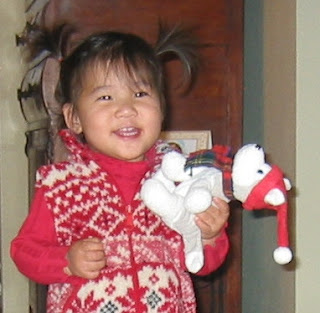 We bought our tree the second weekend in December and I decided we should have a tree triming party to celebrate our first Christmas together. It was last minute but was such fun. All of the kids were in charge of decorating the tree. Maya supervised - as you see she is telling Oliver where his ornaments should go.

It was a Pomitini themed party for all the adults and Good God did I have too many of them. Still can't look at Pomegranate juice.

The pictures by the tree are from our own photo shoot in the living room for holiday cards. She loved posing for me. Always going back to her mark when I asked - my little SuperModel.

Tonight is New Year's Eve. Missy Pooh is upstairs sound asleep. I am one happy Mama. 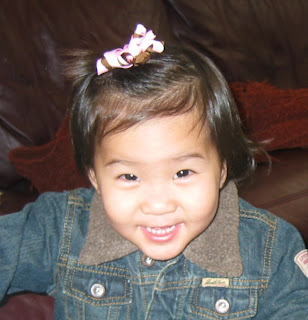 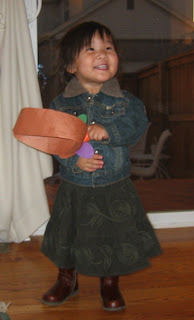 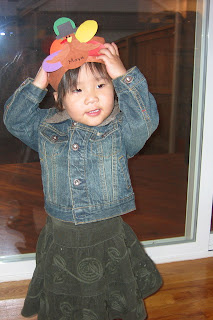 Posted by Kimberly Collins at Monday, December 31, 2007 No comments: 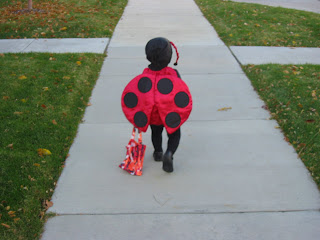 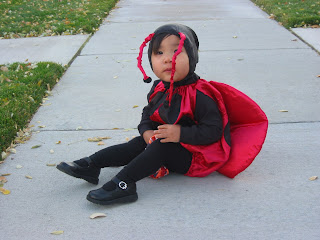 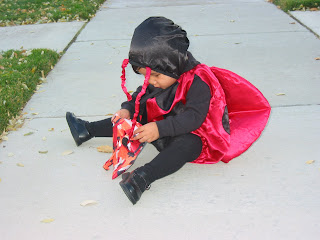 Soccer and other tidbits.... 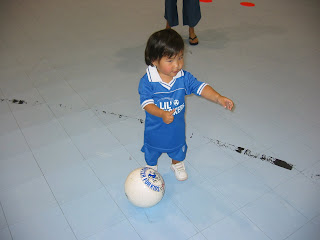 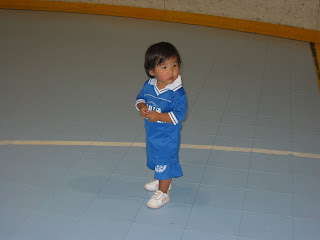 Well there is actually a soccer program at Maya's young age. Unbelievable. I grew up playing soccer with my Mother as the coach for our travel league. Back in the day - Good Lord - girls' leagues ended at 16 years old. At that point I started coaching and loved it. One of the age groups I coached was the earliest at 5-6 years old co-ed. So I was shocked that they now start them this young. Soccer is a stretch. At the first practice, Maya just stepped on the ball and now is a future goalie only wanting to pick it up. Still it is adorable watching all of these little people try to figure it all out. And - let's face it - it's all about the outfit. I mean seriously - how cute is this uniform all the way down to little Miss' ankles??? It doesn't get any better.

Maya will be 16 months old next week and tomorrow we are home 7 months. To think of all that has changed. Maya sleeps now. Even though she has for months I'm still surprised each morning. Now - she laughs and smiles and loves and kisses. I look at her and wonder if there is any sign of remembrance of her first months. What if any memories will stay with her as she gets older. I think about her biological Mother. On Maya's birthday, I thought about her Mother a lot. I thanked her for having the courage to have Maya and the maturity to do what was best for her. When Maya gets older and understands, we will have a "ritual" for lack of a better word to remember her Mother on Maya's birthday and hopefully give Maya a healthy appreciation for her biological Mother. I haven't figured out yet quite what this ritual will be - any ideas??? I do wish somehow her Mother could know that she is a happy, happy, smart kid and so loved not just by me but her whole extended family. One of the best gifts we received when we returned home was a beautiful picture frame and inside a note that s 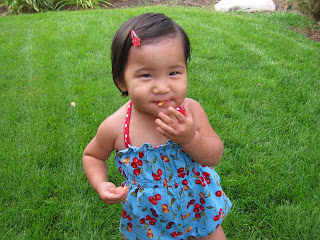 aid Maya Marie Welcome to the Family. We love you and can't wait to meet you! This was from my cousin and her family.

Maya speaks her native Russian (at least in my world she does) - she nods her head and says "Da, da" - in her always emphatic tone. We're working on "Niyet" but a vigorous shake of the head gets the point across. 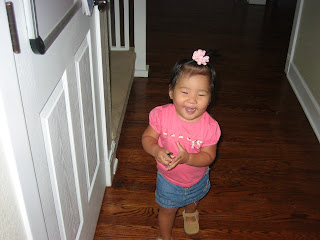 Grandma and Grandpa moved here a month ago just a mile away. We are sooooo lucky to have them here. And being single it is amazing to have help. Uncle Michael will be here for Christmas and it will be the first Christmas in 6 years that we have all been together - and of course the first with Maya. I haven't been this excited for the Holidays since I was a kid. I bought her Halloween costume in August! I'll be posting those pictures for sure.
Posted by Kimberly Collins at Monday, October 08, 2007 1 comment:

Cutie Patootie! Finally can get bows and clips in her hair. Nothing I enjoy more than dressing her........ 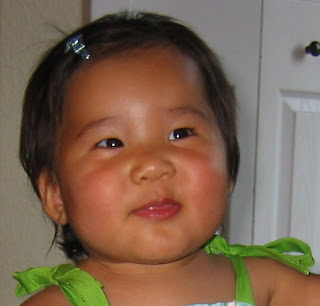 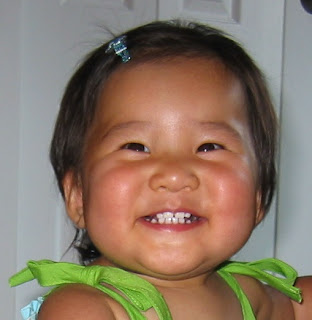 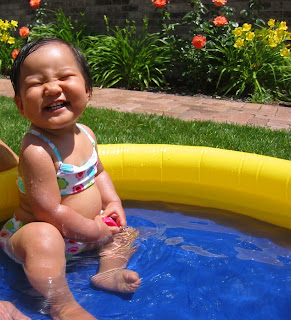 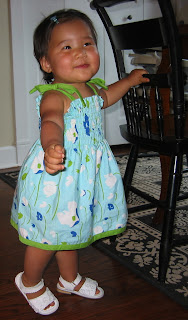 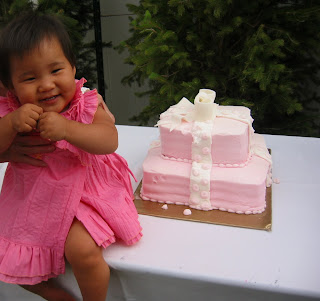 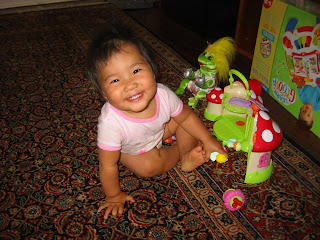 She is just too damn cute and so much fun. Such a happy and funny little person - loves to be the center of attention. I hardly saw her the whole night of her party. Smiles and flirts with everyone. Every week she does something new and usually very funny. Still obessessed with the dogs - "dat" and with music - dances all the time even to the music on commercials. Started at Primrose (school just 1 mile away) last week and loves being with all the kids and particularily Miss Alejandra and Miss Jacque two of her teachers. She's walking - Grandma was determined that she walk before her first birthday - she did take a few steps at a time but now is really movin'. She really is just a blast. I so enjoy her.
Posted by Kimberly Collins at Friday, July 06, 2007 7 comments: